Airport Rail and the Geelong Diversion

The Age and the Herald Sun are reporting that the State and Federal governments have come to an agreement on the Airport Rail project. Let's take a look at what they've agreed to, and what it means for different groups.

Airport trains will travel along the existing Metro tracks between Sunshine and the city, joining Sunbury-line services to travel through the Melbourne Metro 1 tunnel, and turning into Cranbourne/Pakenham trains as they head out the other side. This will mean a slightly slower journey from the CBD than an express service, but still only 29 minutes to Town Hall/Flinders Street station, which I'd say is good enough. SkyBus quotes 22 minutes to Southern Cross, but that's very dependent on traffic - it often takes at least 30 minutes, and can take dramatically longer. The train won't get stuck in traffic, so it should stick to that 29 minute figure pretty reliably.
Running as a normal Metro extension through MM1 also means a single-seat journey for a lot more people who can get on an airport train from their local station, and a quick two-seat journey for a lot more. (Remembering that the proposed Airport Tunnel probably wouldn't have stopped at Footscray, meaning a likely three-seat journey even for the Werribee line). The Herald Sun said 93% of airport trips don't start in the CBD, which makes sense - it's mainly tourists and other visitors who will be staying in the CBD; all the locals flying out, and the locals who work at the airport, will be spread around any number of suburbs.
The Age quotes the trip time from Sunshine to the Airport at 11 minutes, but quotes Ballarat-Airport as being 90 minutes. This is a little pessimistic; it seems to rely on the slowest Ballarat trains, and the worst-case scenario transfer (ie if you step off the Ballarat train just as the Airport train leaves, and you have to wait 10 minutes for the next one). It could take up to 90 minutes, but it's more likely to be around 80 minutes - and the best-case scenario is about 70. In any case, this is significantly better than the ~2hrs it takes at the moment, going all the way into Southern Cross and using SkyBus; it's comparable to how long the Ballarat Airport Shuttle Bus takes, but it will run considerably more frequently than that does. So a substantial improvement all round!
Media reports flag that the Airport train will attract a premium fare, comparable to SkyBus (or to the various other Airport rail systems around Australia), though it hasn't been precisely revealed what this will be. This is disappointing, as I'd hoped it'd be a standard Zone 2 fare, no different to any other destination - as I've argued previously, we didn't charge premium fares to get to Mernda when the government spent the money to build the line there, so the Airport shouldn't really be any different. However, a modest premium fare does seem to be something most (inbound or outbound) tourists are willing to tolerate for airport access around the world, so as long as it's not too high, this shouldn't cause too many problems. One big improvement: it'll be integrated into Myki, so you won't need to buy a separate ticket like you do for SkyBus.
It is worth noting that SkyBus has a discount program for airport employees to buy periodical tickets, so that they can pay a more reasonable fare to get to work every day, rather than the premium fare the rest of us pay for one-off trips; it will be absolutely essential for the same kind of program to be implemented for Airport Rail. Airport workers create the most travel demand out of any group, precisely because they travel there every day, so we need to make sure they're not incentivised into their cars.
The other aspect of the announcement, though, is that the Geelong line will divert back to the Werribee corridor. From the initial announcements, it was thought this meant that there would be a new two-track railway built between Werribee and Laverton, to allow Geelong trains to run express, followed by sharing Metro tracks from Laverton to the city. However the government has since advised that this is a detail they're still figuring out - it may just be one new track from Werribee to Laverton, in which case presumably peak services would use this while counter-peak services would slot in between Metro trains on the existing track pair (and/or continue using the Sunshine alignment).
This goes some way to addressing what was always going to be the big headache in the west - how to get Airport AND Sunbury AND Bendigo AND Melton AND Ballarat AND Wyndham Vale AND Geelong trains to all fit on just two pairs of tracks. The Sunshine-city tunnel was one solution to this; my idea of putting Airport trains on RRL and juggling Melton and Wyndham Vale onto the Metro tracks was another; this is a third solution, and it has the potential to be a good one - but I suspect its success might hinge on whether they end up adding one or two tracks to Laverton.
Although we don't have a lot of details as to precisely how many it will be, it seems that some Geelong trains will still use the RRL alignment via Sunshine, but the majority will be using the Werribee alignment. The Werribee route is 8km shorter than the Sunshine route, so it is theoretically going to be quicker - the reason they made the shift to the longer route in the first place was that capacity and reliability were bigger problems than journey times, with V/Line trains constantly getting stuck behind Metro trains. Clearly those issues would still exist on the inner sections, but quadding Laverton-Werribee would be a significant help - it's about 40% of the total length of the line. Just adding a third track in this section would help, but would it be enough? Hard to be sure.
Regardless, the government has signalled that it sees this as the "first stage" of upgrading the Geelong line, acknowledging that more work will be needed in future - presumably for faster line speeds out in the countryside, but also to address these capacity constraints at the city end. The Melbourne Metro 2 tunnel will hopefully be part of that. 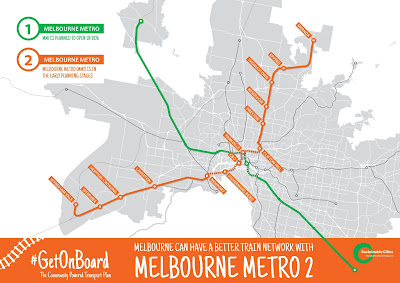 So what does this mean for Ballarat?
Despite its proponents tying it to regional high speed rail, the proposed Sunshine-city tunnel was never going to result in significantly higher speeds than the existing RRL lines. When you first pull out of Tokyo Station, or Barcelona Sants, or Amsterdam Centraal, or Paris Gare du Nord, you travel at relatively sedate speeds while you travel through the suburbs - around 130km/h, which is RRL's speed limit. They only really stretch the train's legs and get up into proper HSR territory when they get out into the countryside. Given that going really fast through a tunnel creates big engineering challenges with air pressure and tunnel boom, and that trains wouldn't have much time to cruise at high speeds before having to slow down again to stop at Sunshine, it wouldn't even save much travel time to go faster in this short section. So even if they had built the Sunshine-city tunnel, it wouldn't have cut much time from a Ballarat journey. When and if Ballarat gets high-speed trains, they will only get up to top speed once they're in the countryside - and that's as true today as it was yesterday.
What the tunnel would have done is add a lot of capacity (it's almost always about capacity) allowing us to alleviate that headache and run more trains to all those destinations. So the outcome for Ballarat is probably going to depend on precisely what happens with the Werribee corridor - how much capacity they add there. If we can get the majority of Geelong trains off the RRL corridor, that will free up a HEAP of space for other trains to run. The MM1 corridor has space for 24 trains per hour, and it's anticipated they will run 12 to Sunbury and 6 to the Airport, which leaves 6 paths for Melton. Then RRL only has to cope with 3-4 Ballarat trains, 3-4 Bendigo trains, a small number of Geelong trains, and a whole lot of Wyndham Vale trains. Eminently doable. But if they only add a bit of capacity to the Werribee corridor, and a substantial number of Geelong trains still need to go via Sunshine, that means less capacity would be available for those other lines.
A mistake that rail advocates often make, and that the road lobby never does, is to ignore incrementalism and ask for everything at once. We have a good understanding of what the capacity of a particular piece of infrastructure will be, and what our needs will be, and we demand infrastructure that can cope with the next several decades of growth. The road lobby also understands what a given project would do and what their long-term plan is, but they never ask for the whole salami - they always just ask for a slice. But then they ask for the next slice, and the next, and the next, until they get what they want. For example, they've had the long-term vision of a freeway ring around Melbourne, harking back to the 1969 Melbourne Transportation Plan; they got the northern and western section built in the 1990s, which very quickly filled up with traffic, which was used to justify huge expenditure on a widening project in the 2010s. In the 2020s they're about to get the North East Link to connect the Ring Road to the Eastern Fwy, which despite its place in the orbital ring, will do a lot to funnel city-bound cars from the north east onto the Eastern, dumping them at Hoddle Street - and indeed the NEL project includes adding extra lanes to the Eastern to cope with this. In the 2030s, the increased traffic this megaroad induces will probably be used to justify the next project, whether it's a revival of the East West Link or something else like it.
There's been a lot of hyperbole from the Rail Futures Institute and Committee for Ballarat on how bad the Airport Rail decision is for Ballarat. While there's still some uncertainty about precisely how much capacity they're going to create on the Werribee corridor, and while it's clearly in our interests to push them to quadruplicate it rather than triplicate it, I disagree with their "disaster" rhetoric. This is a step forward for us - it doesn't get us everything we want, but it gets us closer to our goal. And while I understand the fear that we're missing an opportunity, it's not like we're not going to get another one. Rail patronage from the western suburbs of Melbourne and the regional cities beyond them will continue to grow, will continue to provide ticket revenue, and will continue to put pressure on elected officials - not just because of population growth, but because the upgrades they're building will improve the service and will get more people on trains. And this weekend's announcement that they won't build the tunnel at this time, in no way precludes them from deciding to build it - or any other capacity-boosting infrastructure for the west - in the future.
The Airport Rail project and the Geelong diversion are both big slices of salami, and finally resolve the question of whether MM1 will have slots available for Melton trains. So now let's get stuck into campaigning for them to electrify the Melton line and actually fill those slots as soon as possible.
Posted by Simbera at 18:03